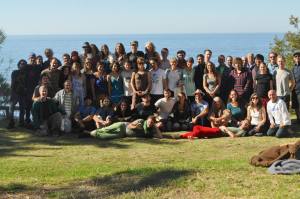 PCC Faculty and Students on their annual retreat at Esalen in Big Sur, CA

A growing consensus of scientists, scholars, and visionaries now recognizes that the Earth Community is facing an unprecedented evolutionary challenge. The ecological, political, and spiritual crisis of late modernity calls for a fundamental reorientation of our civilization, including a transformation of our institutions and of our own consciousness. PCC attracts intellectually engaged individuals who are in varying degrees dismayed by what they see happening in industrial societies and who are striving to find meaningful ways to develop their gifts to serve the future of the world.

The PCC program at CIIS was designed in the early 1990s by a group of distinguished scholars, teachers, and activists who share a sense of the unique gravity and promise of our moment in history.

The program is inspired by a three-fold vision: to revive the original essence of philosophy as the love of wisdom, to pursue a multidisciplinary study of cosmology based on the evolutionary unfolding of the universe and the Earth community, and to explore the inner worlds of consciousness and the psyche. Central to the PCC vision is the conviction that these three lines of inquiry must inform and influence each other, in the service of bringing forth a viable and coherent world view for our civilization.

The PCC program will support those called to this work in three distinct but related areas:

Another way forward is possible.