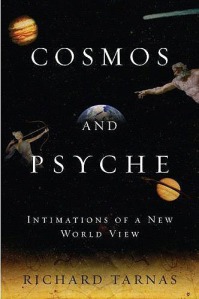 “It is hard to think of many books written in the past century that will still be read two hundred years from now. Cosmos and Psyche will top that short list. It is majestic, sweeping, and profound. This will be a book for the ages. It will stand over time with the seminal expressions of the human spirit.”
—William Van Dusen Wishard, author of Between Two Ages: The 21st Century and The Crisis of Meaning

“Cosmos and Psyche is an epoch-making work. It combines impeccably meticulous scholarship and extraordinary clarity of thinking and writing with deep creative vision. The evidence contained here represents the most significant challenge I have seen to the materialistic paradigm of modern science.”
—Stanislav Grof, author of Psychology of the Future

“This is the closest my head has been to exploding while reading a book.”
—Mary Hynes, CBC Tapestry

“What more important message could there be for our time? If you want to understand more deeply the currents which have shaped and are shaping our world, then this passionate, brilliant, and luminous book is essential reading.”
—David Lorimer, Scientific and Medical Network Review

“Breathtaking in the scope and scale of its vision, this extraordinary book shatters our cosmological assumptions as it awakens us to a living universe and its creative intelligence. Tarnas succeeds masterfully in bringing his encyclopedic knowledge forged in writing the critically acclaimed Passion of the Western Mind to the task of discerning the archetypal pulse of history. Spellbinding, eloquent, compelling, Cosmos and Psyche will be a marker for an entire generation.”
—Christopher Bache, Professor of Philosophy and Religious Studies, Youngstown State University, author of Dark Night, Early Dawn

“Some rare books, presenting very challenging evidence after decades of research, have the power to transform a whole culture. It happened with the groundbreaking works by Copernicus, Darwin, and Freud. It may happen now with Cosmos and Psyche. Searching beneath the depths of the psyche Tarnas has found the heights of the cosmos. This book will radically transform the way we see cultural and political history, individual life journeys, and our sense of participation in the universe.”
—Jordi Pigem, author of La odisea de Occidente (The Odyssey of the West)

“Cosmos and Psyche opens doors in the reader’s mind, doors towards the future. Yes, it records, analyzes, and interprets events of the past, but its primary relevance points towards the future. Its thorough research fulfills a function that is central to the genuine, hard-nosed pursuit of human knowledge: ‘the elicitation of disbelief and the celebration of surprise’ (Lewis Thomas). Richard Tarnas dares to be far ahead of conventional thought. He broadens our horizons until we suddenly see with delight vistas and connections we never expected. Here at last is a world view which – in contrast to prevailing ones – has a future.”
—David Steindl-Rast, author of Belonging to the Universe

“With this book Tarnas has succeeded in unveiling what only a few years ago might have seemed impossible: an accessible bridge between the mainstream high culture and an emerging world view that returns the soul to the cosmos.”
—Renn Butler, New Age Journal Reviews

“A profound and beautiful book. Could there be a hidden order to our universe that conventional science has completely overlooked? With rich historical scholarship and exquisite prose, Tarnas has written a work that not only challenges our ways of thinking about the world but is a transformative experience in itself. A brilliant tour de force that will ignite debate for years to come.”
—Ray Grasse, author of The Waking Dream

“Beyond the depths of our inner experience, even beyond the wonders of the natural world, Cosmos and Psyche confronts us with the astonishing challenge of discerning meaning in the very order and structure of the physical universe. Reconnecting the heavens with the human psyche may well be the ‘last frontier’ in the re-enchantment of the cosmos. Richard Tarnas’ magnum opus sets the grounds to meet, and ultimately overcome, that deepest of all dualisms. The opening of the archetypal eye has never received a more powerful and elegant expression.”
—Jorge N. Ferrer, author of Revisioning Transpersonal Theory

“Tarnas not only possesses a staggeringly comprehensive reservoir of cultural and historical knowledge, he is a lucid, beautiful writer who can sustain not only the interest but the excitement of the reader for hundreds of pages at a time.”
—Frederick J. Dennehy, Rudolf Steiner Library Newsletter

With The Passion of the Western Mind, Richard Tarnas gave the world what many scholars, from Joseph Campbell to Huston Smith, regarded as one of the finest histories of the Western mind and spirit ever written. Now, Cosmos and Psyche challenges the basic assumptions of the modern world view with an extraordinary body of evidence that points towards a profound new understanding of the human role in the cosmos.

Cosmos and Psyche: Intimations of a New World View shines new light on the unfolding drama of human history and our own critical age. It also suggests a new possibility for reuniting religion and science, soul and intellect, ancient wisdom and modern reason in the quest to understand the past and create the future. Published by Viking Press 2006 (hardcover), and Plume 2007 (paperback)